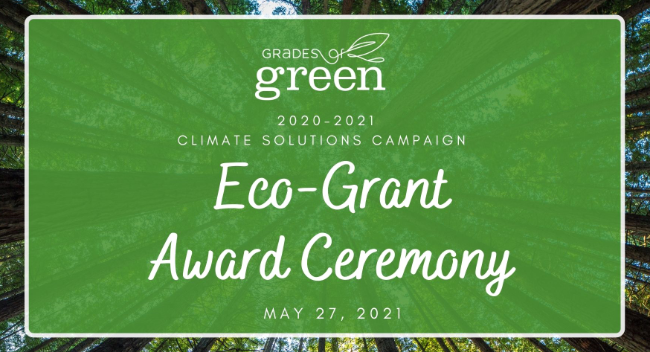 We’re so excited to share the winners of the 2020-2021 Climate Solutions Campaign! Please explore the student teams who won Eco-Grants for their incredible environmental impact and those who we honored for their amazing efforts. You can also relive the fun by watching a recording of our live virtual announcement event, here.

Team MCDC was a wonderful team to work with during the Climate Solutions Campaign. They are a group of four motivated girls who are passionate about solving the climate crisis in their community and ended up inspiring their community to plant more than 3,500 tree saplings! From the start, they were committed to the campaign and it showed in their organization, coordination, and overall success of their project. They had clear goals on how to help their community and executed their project exceptionally well.

While researching the global climate impact of waste, the STEAM Express team from Gardena High School was very concerned about the environmental cost of fast fashion and textile waste. What really struck them was that 84% of donated clothes still end up going to the landfill. To do something about it, the STEAM Express team worked with local organizations like LAcarGUY and BizHaus, a co-working space where Grades of Green has an office, to collect old clothes. These caring students decided to turn the clothes they collected into blankets to be donated to local homeless shelters. For their dedication to the environment and to people in need, the students were chosen by the South Bay Rotary Club to receive a special Eco-Grant!

Mary Bragg went above and beyond. The team is enormous (over 50 kids) so they split into 3 groups. Each group voted on a group leader and held a weekly meeting where they set an agenda and met their goals. These 5th and 6th graders picked trees for their topic and decided to have each group focus on a different solution. Group one focused on increasing urban tree cover, group two focused on protecting tropical forests, and group three focused on reducing the heat island effect.

This team is 100% student-led with very little to no adult support. Sam Torres, a Junior, is the leader of the team and organizes everything from the meetings to the project and outreach. This team of about 40 students was very successful in inspiring their community to eat less meat and go meatless on Mondays. They garnered support from local businesses and engaging their audience to participate in their online challenge.

The dedicated Ecology and Wildlife Club at Whitney High School hosted a community tree sale to offset their school’s paper usage and surpassed their goal by distributing more than 120 trees. This team is very student-led with minimal adult support. They are extremely passionate, organized, and driven and worked very hard on their social media videos and infographics.

This team is exemplary! The students from Helen Keller Middle School teamed up with fellow Long Beach students to advocate for the commitment of the Long Beach Unified School District to transition to 100% renewable energy by 2030.  They are very capable and continually show that they’ll one day be future world leaders.

The Redondo Reducers Club, led by long-time Grades of Green Eco-Leader, Rylee, hosted a Plastic Pollution Solutions Panel featuring state and local leaders that
dove deep into the most pressing issues around plastic pollution. Rylee worked very hard to pull together this panel which required her to coordinate with numerous community leaders to make it such a success.

Students from Adams and Farmington Hills High Schools collaborated on a project to get their schools to ban styrofoam lunch trays and replace them with sustainable alternatives. These teams really put in the time and effort to work as a collective unit to try and get styrofoam banned in their cafeterias! You could tell that they were extremely organized and were always available to move their project forward.

The team from Weston High School, led by Max, collected more than 500 pounds of plastic bags from his community to repurpose into a public bench. Max worked to coordinate with many leaders in his community and they all responded positively. He is looking for a longer-term solution to the problem of plastic waste and plans to use his Eco-Grant to help fund a bailer for his local waste transfer station. He always managed to come through and get the work done!

The “To Environment, With Love” Team at the Modern High School for Girls
Kolkata, India

These girls are on a mission! Two high schoolers started an organization called “To Environment, With Love” in their community before participating in the Campaign. They called family friends, knocked on neighbors’ doors, made phone calls and started an Instagram page to start collecting recyclables such as e-waste, paper waste, and items that could be donated or upcycled. Although they started the campaign with an existing project, they were able to build on it significantly this school year. Not only did they expand their collection in their community, but they were also able to reach other high school students all over the world to start chapters in other cities. They now mentor those students to do the same thing they’re doing in their community.

The students from the Kishoka Youth Organization hosted a bike ride event in their community where they planted 100 mangrove seedlings, in addition to conducting litter pick-ups, presenting at seminars and educating younger students on the importance of mangroves. The Kishoka Youth Organization is led by a very energetic and dedicated director who keeps his students active non-stop. He’s committed to empowering his students and wants them to learn and get involved in making environmental improvements. The team of kids made a ton of impact this year!

Adriel chose a difficult advocacy project – he created a food waste certification system for local businesses – with the potential to make a major impact on food waste in the future. Because of the scope of his Campaign, he is still early in the process, but he continues to be committed to his project and has laid significant groundwork for his goals.

Mission Unsoakable checked every educational goal in the RISE campaign outline. They used all their guidebook materials, learned a TON about project management, used every resource available, and made terrific use of their Ask the Expert meeting. They were truly the most enthusiastic team and showed so much dedication to their project!

The “Jeez We Like Trees” Team at Nathaniel Hawthorne Middle School 74
Queens, NY

What a great team name from Nathanial Hawthorne! This team was heavily student-led, holding their own virtual meetings and organizing their ideas and thoughts. This creative and fun team had an awesome project: they planted trees outside their school to filter polluted air from the nearby docks.

The HEAR Club from the California Academy of Mathematics and Science
Carson, CA

What a high effort, high-functioning team! The HEAR Club has always been an awesome team to work with. This year, the team focused on fighting fashion waste by repurposing used clothes into 150+ dog toys for Gone to the Dogs Rescue. They partnered with long-time Grades of Green supporter, Subaru Pacific, to collect donated clothes and made a lot of dogs very happy!