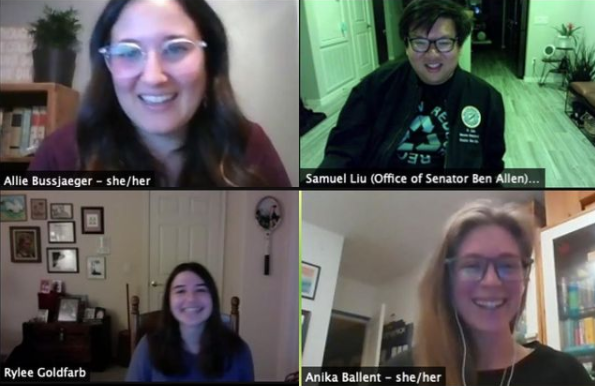 We can’t recycle out of the problem…Reduce your use!

Did you know that 8 million metric tons of plastic enters the ocean each year? This equals one trash truck dumping its load of plastic into the ocean every minute of every day.

Rylee Goldfarb, a 10th-grade student from Redondo Beach is passionate about creating a healthier world and is partnering with the creators of The Story of Plastic for the Redondo Reducers Club’s Reduce Your Use Campaign. The panel discussion will dive deep into the most pressing issues around plastic pollution and reflect on the themes of the award-winning documentary.

Register for our panel discussion and get the opportunity to see this groundbreaking documentary for free!

Watch a Recording of the Discussion!

In his role as the Deputy Chief of Staff, Samuel serves as a strategic senior advisor to Senator Allen and oversees the operations of the District office. Prior to that, Samuel ran Senator Allen’s successful campaign for State Senate in 2014 and most recently ran the successful Senate campaign for State Senator-elect Henry Stern.
He brings prior experience working in the State Legislature for then Assemblymember Ted Lieu and has also worked for the Asian American Legal Defense and Education Fund, the Alliance for Children’s Rights as well as the Citizens’ Commission on Jail Violence. He is an alumnus of the New Leader’s Council fellowship program and served on the board of the Asian Professional Exchange and the Asian Pacific American Legislative Staff Network in leadership positions.
Samuel has a Juris Doctorate degree from Loyola Law School and a bachelor’s degree from the University of California, Berkeley.

Anika has been studying and educating about the plastics issue since 2010. Her academic background is in the Earth Sciences.  During her undergrad at Jacobs University Bremen she studied how microplastics move underwater, and she later completed a Masters in Geology at the University of Western Ontario studying microplastics in the sediments of Lake Ontario. Since then, she’s been developing educational content around the complexities of the plastics issue at the non-profit Algalita to empower and prepare young people to take action on this issue.

Director of Impact and Sustainability, human-I-T

For the past decade, Allie has worked with environmental nonprofits to cultivate behavior changes to protect our planet. Currently, Allie is the Director of Impact and Sustainability at human-I-T, a nonprofit that takes technology that would normally be recycled or sent to a landfill and refurbished it to redistribute to low-income families. Previously, she served as the Recycling Center Coordinator at California State University, Long Beach, where she oversaw the recycling center, as well as the Co-Executive Director at Grades of Green, a nonprofit dedicated to inspiring kids to care for the earth.

What’s the Reduce Your Use Campaign?

Click here to learn more about Rylee and the Reduce Your Use Campaign!