The Hamilton Tower of Trays Challenge 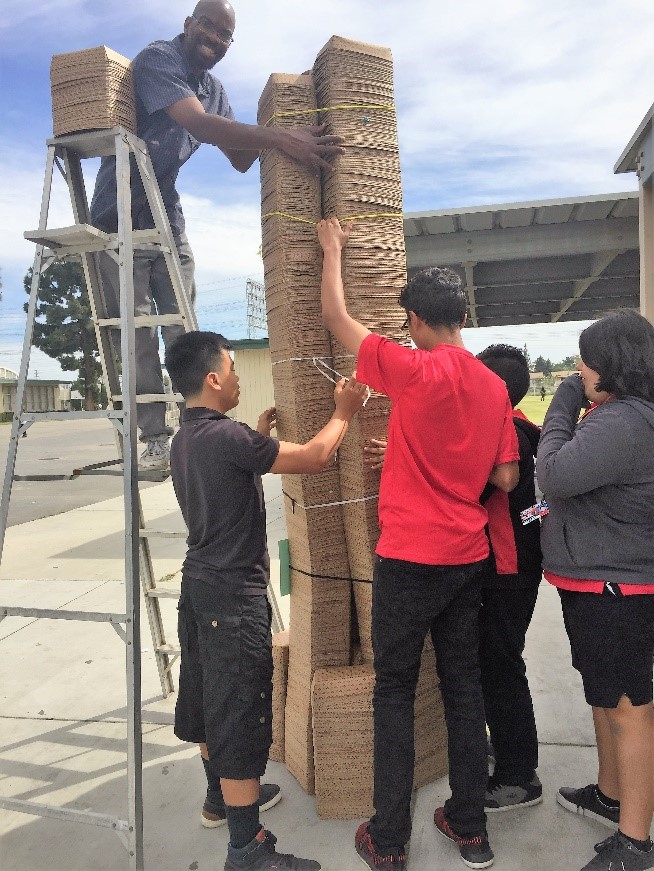 This year Hamilton Middle School from Long Beach got a refresher lesson in recycling, and a little something extra as well. The fun began when the school enrolled in Grades of Green’s 2016-2017 Trash Free Lunch Challenge. As part of the program, students were asked to stack their paper lunch trays for recycling instead of throwing them away. As the students became familiar with the new system, the daily stacks of trays grew taller and taller until one day – just for fun – head custodian, LaMont, challenged the kids to find out how high they could stack their trays. Thus, the Tower of Trays Challenge was born! Stinson put a couple of rules on his Challenge:

1. The Tower had to be self-supporting


2. Only recyclable materials could be used in Tower construction.


Kids were scoured the lunch area for any and all trays to add to the project. No one needed to be reminded to stack trays and not a tray went to waste.As the Tower of Trays grew, the kids could see the impact of recycling in a tangible way. They could literally see how many trays were getting recycled instead of going to the landfill. The school has been able to cut its lunch trash by over 50% simply by recovering this single item from the waste stream.

What started out as just a bit of recycling fun became so much more. All kinds of engineering concepts were being spontaneously tested and discussed. What can we do to support it? How can we prevent it from leaning? A spirit of teamwork and camaraderie developed. Even the robotics club got involved. The kids experimented by expanding the base of the tower and by using smaller stacks of trays to buttress a central tower – a bit like the Burj Khalifa skyscraper in Abu Dhabi, one of the tallest buildings in the world. In the end, the Hamilton Tower of Trays reached a height of over 14 feet!

The “just for fun” project was so successful, Stinson plans to make the Challenge a yearly event. Last week, Grades of Green supported Hamilton Middle Schools Tower of Trays Challenge by providing an assembly on waste reduction efforts and the importance of keeping waste out of landfills by properly stacking trays. If sometime this spring you see a new tower rising above the skyline, it might just be the environmental engineers of Hamilton Middle School playing around while protecting the environment!

Interested in getting your school involved with waste reduction efforts like Hamilton Middle School? Click here to learn more and to apply for the 2017-2018 Trash Free Lunch Challenge.