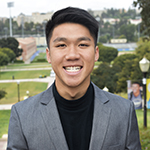 Home Who We Are Our Team Malcolm Au

Malcolm was raised in the South Bay, residing in sunny El Segundo. Growing up, he spent a lot of time at the beach and exploring the California wilderness, which caused him to form a deep passion for environmental issues. He stayed local and attended UCLA, earning a degree in Environmental Science with an emphasis in Environmental Engineering. During his time at UCLA, he was the head manager of the UCLA Men’s Basketball Team, and led a team that aided in reaching UCLA’s Zero-Waste and Sustainability Goals. Malcolm is excited to work with Grades of Green, looking to serve and inspire students across the globe. During his free time, Malcolm enjoys spending time with friends, backpacking, running, and cooking.